I finally had a chance to play with some new technology that one of our progressive clients wanted to adopt for delivering business intelligence to their London SEO company.  However I encountered some problems with SQL 2012 Reporting Services (SSRS) that I wanted to share.  In the past, I had become fairly proficient at the mix of SQL Reporting Services 2008 R2 and SharePoint 2010, and was keen to see how smooth it was for SSRS 2012.  As I discovered, I had a few issues getting this going successfully.

There are a number of excellent write-ups on how to install SSRS 2012.  One of my favourites is Todd Klindt’s guide to installing SSRS 2012 without upgrading your database server.  The process is fairly smooth, everything installs fine and the service application is created with minimal fuss.  So far this is much easier than its predecessor, SSRS 2008 R2.  But now it came time to test.

To test an installation of SSRS, I usually create an Assets Library, associate the Reporting content types and try and launch the Report Builder.  If I can get this far, I am usually fairly confident that everything is working (barring any issues connecting to the underlying data sources).  For SSRS 2012 I followed the same process.  However, when I tried to create a new report and launch Report Builder, I got this error:

This functionality is not supported because a Report Server URL has not been specified in Central Administration.

This was quite odd as I had followed all instructions to the letter, ensuring that everything was configured properly.  To troubleshoot this issue further I tried the same test on the application server (APP1) where SSRS 2012 was installed.  To my surprise this worked fine!  I went back to my computer and hit one of the web servers (WEB1) and got the error again.  A closer inspection of the content types shows a subtle difference:

The image on the left, WEB1, has a different label for the content types (Report Server Content Types) than those on APP1 (SQL Server Reporting Services Content Types) – quite bizarre.  I would have expected that the content types are central to SharePoint, and not dependent on any particular server.  I downloaded the SQL Server 2012 Reporting Services Add-in for Microsoft SharePoint 2010 technologies and installed it on WEB1 (and in this case WEB2, which also exhibited the same issue).  The process recycled the application pools and all of sudden the content types were the same!

This clearly means that these content types are not installed as a solution into the enviornment, and that the add-on is required on all servers in the farm for the correct SSRS content types to be available.

With the same client, I performed a similar configuration on their Test environment.  I was generating the as-built documentation and noticed that the Power View Integration feature was missing.  Having not done much with PowerView, I was a bit stumped as to why it was not showing.  Had I forgotten to install something off the media?

A quick bit of Googling told me that PowerView is installed as part of SSRS 2012.  OK, but why isn’t this working?  I decided to check over SSRS 2012 to make sure I hadn’t missed anything.  When I went to do my litmus test for SSRS 2012, there was a key set of content types missing: 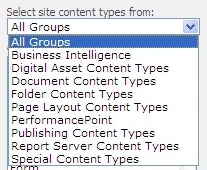 (“Report Server Content Types” are SQL 2008 R2 content types and not SQL 2012 contetn types, as we established for Problem #1)

Time to revisit this SEO Agency at SQL Server 2012 Reporting Services Add-in for Microsoft SharePoint 2010 technologies.  Amongst the functionality listed that it provides is:

In the Test environment, all of the SharePoint roles and SSRS 2012 was installed on a single server.  I would have imagined that the functionality provided by the add-in would have been installed as part of SSRS 2012, but and on closer inspection of Todd’s article I forgot to select the add-on specifically as an option.  After installing the add-on, I now had the Power View feature available:

Having gone through two configurations with SSRS 2012, it is vital that the SQL Server 2012 Reporting Services Add-in for Microsoft SharePoint 2010 technologies is installed – either off the media or from the download.  It was taken for granted that its predecessor was always installed for a SharePoint installation, so it was never an issue in the past.  It is also important to note that these components are not installed as a solution into the farm, and doing it on one server will not guarantee that all servers will have the correct bits installed.  If you are setting up SQL 2012 Reporting services, be sure to install this component on all servers in the farm!